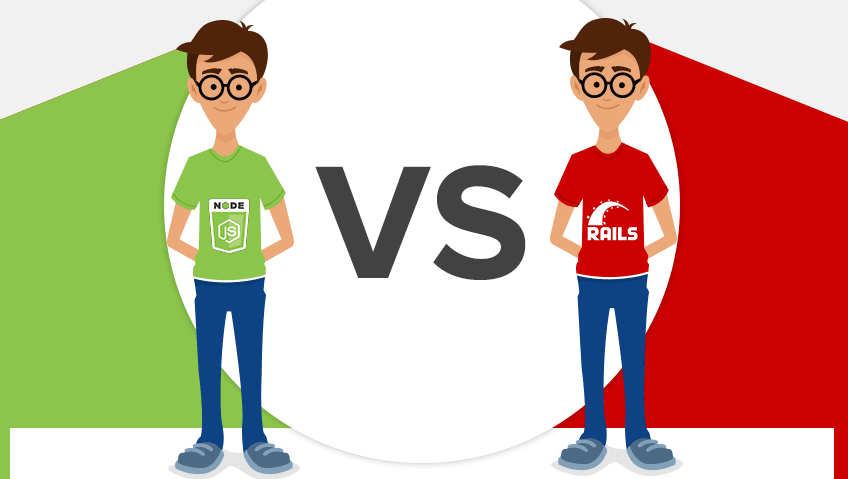 Node.js Vs Ruby on Rails: Know The Differences And Make A Right Choice

We’re living in a world of abundance, making things complicated as businesses can have a tough time deciding which technology to pick and which to dump. As a developer, you must be familiar with Ruby on Rails and Node.js, as these two are leading development technologies.

Are they both good? Yes.

Are they both viable? Yes.

Can they be used for the same goal? No.

Node.js and Ruby on Rails have different goals to address, and as an end-user, you need to ensure which addresses what. In this post, we will highlight Ruby on Rails Vs Nodejs details. So, let’s get started.

Introduction to RoR and Node.js

Node.js is an open-source server-side JavaScript framework that is built on Chrome’s V8 JavaScript engine. It’s preferred because of its impeccable cross-platform capacities.

Ruby on Rails (RoR) is a server-side web development framework. But it’s based on Ruby and promotes using essential web standards like XML and JSON.

Ruby on Rails Vs Nodejs – The Key Differences

RoR works only on the server side. But, Node.js is highly asynchronous and works best on both the client and server side. This is possible because Node.js is based on JavaScript, a full-stack language.

Node.js is a single-threaded framework, while Ruby on Rails is a multi-thread framework.

These two use different package managers. In the case of Node.js, the package manager is NPM or Node Package Manager or NPM, while Ruby Gems works in Ruby on Rails.

NPM is mainly a collection of free Node code snippets that developers can use without any hesitation. Ruby Gems is not a collection of the repository. It features standard formats for program distribution.

They both have different use cases.

For instance, Node.js is mainly preferred for server-side, API, and microservices development. Node.js can establish a link between the browser and the server that is the base of server-side development.

API, mainly REST API, development is easy with Node.js as it can process requests fast and supports a full JavaScript stack. These two form the base of RESTAPIs.

Node.js is just the right pick for microservices development because it features a non-blocking request-processing algorithm that enables an app to process requests faster than ever. The super-fast V8 engine of Node.js supports quick real-time data transfer.

Due to its distinct features, Ruby on Rail is preferred for a full-stack web application, CMS, and prototyping development.

As RoR supports the MVC framework, it’s perfect for full-stack development as it reduces the tediousness of the process.

If you’re willing to hire Ruby on Rail developers, consider developing a CMS or Content Management System. With RoR, it’s easy to write super-rich capabilities. As it features a high abstraction level, it’s possible to map the complete databases and tables.

Node.js is a faster option. The page load speed is more rapid than Ruby on Rails.

Node.js, being a full-stack framework, enables developers to design servers. Developers can develop web servers according to the HTTP request handling abilities. This will not happen with RoR, as it depends on WEBrick, Apache, NGINX, and Cherokee.

Thankfully, they both are easy-to-handle frameworks. But, when closely compared, it’s observed that Node.js is easier than RoR. Even a rookie developer can create wonders with Node.js. in the case of RoR, it’s better to have a basic understanding of Ruby-level methods, classes, and objects to get started.

All About Making A Right Choice

Both Ruby on Rails and Node.js are great resources for application development. They are both easy to use and provide ample facilities, but they have significant differences and objectives.

Before you hire Ruby on Rails developer or outsource them, have your hands on the critical differences between these two shares and your development objects. Choose the one that fits the best.

Seems too much work? It’s better to avail of a professional development consultant and have clarity. And if you have selected your framework, hire the development experts. Bacancy technology can help you with the next step in both cases.

SHARE ON
TwitterFacebookLinkedInPin It
#node js #Node.js Vs Ruby on Rail #ruby on rails
Tech Behind It