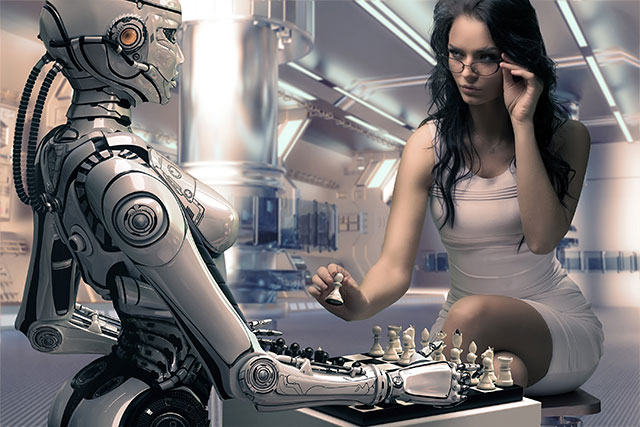 What Jobs are Threatened by Artificial Intelligence?

The term Artificial Intelligence brings together technologies and techniques that aim to mimic human behaviour and the logical functioning of his thought and brain. Still not very important in 2015 with a market of two hundred million dollars, it is expected that it will be close to ninety billion dollars by 2025 on a global scale. Ultimately, this technology should be found in all aspects of our daily life, both in our private and professional life.

Regarding the job market, more or less significant changes – according to the various studies – are to be expected in the coming years.

To understand these transformations, we must take an interest in the intrinsic functioning of Artificial Intelligence and the digital sector.

The latter is governed by an internal functioning, based on binary representations. In other words, the sequences of 0 and 1 are the very essence of how digital technologies work. Artificial Intelligence is a technique created on the same binary principle, but to which we have added the reflection and the ability to make choices using raw data, which is normally unique to humans.

It is fundamental to understand that Artificial Intelligence then finds itself like a fish in water in any digital system since these two entities have the same internal functioning.

All IT professions, but also digital in general, have started to be profoundly modified by these new techniques. The way the electronic devices we use everyday work will therefore be completely changed. We can cite, for example, computers, smartphones or even video game consoles.

All the connected objects that have recently emerged will also, in the short term, be equipped with artificial intelligence. We then think of watches or connected clocks which will be managed remotely by an Artificial Intelligence having a form of intellectual and decision-making autonomy in a short time.

Voice assistants are also Artificial Intelligence that remotely controls all connected and electronic objects in your home. They appeared four years ago in the United States and landed a few months ago in France. On a simple voice request from you, it can manage the opening and closing of the shutters of the house, the switching on of the lights, the interior temperature, etc.

For all of these everyday objects and gestures to be managed by AI, they must be digital, that is, be designed in binary code. AI, made up of those same two digits, has extraordinary information processing speed and can deal with a multitude of topics and problems simultaneously. She also has the ability to immediately find what is unusual in a process, and decide to resolve it in the most appropriate way.

Digital professionals, therefore, tend to become ultra-versatile. Concentrated mainly on computer objects five years ago, computer technicians or programmers are now looking at market research and want to know more about the habits of the inhabitants of any country.

The professions affected by technological developments related to Artificial Intelligence

According to studies carried out over the past two years, Artificial Intelligence should be integrated into nearly 40% to 70% of businesses by 2025. In other words, almost all of our businesses will be transformed. Some specialists in the sector even speak of a “new Industrial Revolution”.

This development of Artificial Intelligence involves robotization and digital automation of most industrial trades. A large part of the jobs in assembly line work has already disappeared with the installation, little by little, of robots managed by Artificial Intelligence. These robots can manage several stations in industrial chains simultaneously, do not rest and do not need to eat. This results in lower production costs and an increased increase in production. Some experts fear a scarcity of low-skilled jobs in all countries of the world.

Long confined to repetitive actions such as can be found in industry, Artificial Intelligence will be found in a few years in any position requiring a certain logic of reflection and operation. The profession of trader, for example, with its probability calculations and its ubiquitous figures is likely to evolve with the arrival on the market of robots specializing in the management and optimization of digital models. The finance professions, in general, will also be disrupted by Artificial Intelligence. Careers in the banking sector will therefore soon experience unprecedented changes.

The notarial and legal sector may also have to adapt in the years to come. AI has the capability to record all the laws of one or more nations. It is then very easy for him to think about a given problem by studying each law and to extract the most suitable solution.

The healthcare professions are also required to adapt. Some robots are already able to memorize the way a human body is made, watch radio and perceive the patient’s problem in record time and with a precision impossible for a human being.

The most of software and development like web (Kissanime) development is also already occupying with AI and reusability which will also affect the professional.

The professions which are likely to change or have to adapt in the years to come are therefore perhaps those which appeal to the meaning of deduction, which includes repeated gestures or which have a numerical or administrative logic.

The jobs that should undergo this “revolution” the least are therefore those that require constant adaptation to sudden and unforeseen changes. Those who, for example, requires an analysis of the environment and its permanent changes in order to learn independently and thus constantly adapt one’s behaviour.